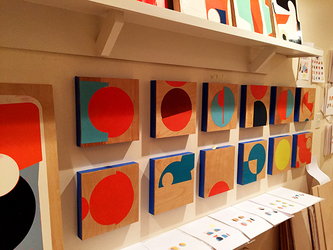 I create paintings with a collage sensibility. They are informed by an ongoing investigation into the effects of color and form in various states of choreography
and collision. The work is often composed on raw wood surfaces incorporating the woodgrain as a medium both in addition to, and distinct from, the color palette.
My work’s genesis lies in my childhood, where, surrounded by simple materials on the floor, I would catalog treasured objects by color, size and shape.
This organized play codifying the formal characteristics of leaves, marbles, blocks and paper scraps, collapses in time to inform exactly what I am doing now: manifesting a geometric/biomorphic hybrid abstraction.
Structured figure/ground relationships explore the push-pull of form and color in the space within the edges of the rectangle. Here I am viscerally exploring
how painting and collage can formally work together.  Each new concept is an immersion in shifting planes and forms that afford limitless experimentation
in which I attempt to mine the dual role that color can play both as content and as structure.
The work has a dynamic, haptic quality, as if one could reach in and shift, reposition or rearrange the layers within the frame. Saturated flat color fields
are layered and shuffled in degrees of reveal to float above or recede beneath the picture plane.

I disrupt and concretize the immaculate color fields of the composition through scraped and incised marks on the picture surface.
This reveals the layers beneath so that the final image is not only the outcome of a sequencing of flat color layers but also incorporates painterly gestural qualities.
The resulting work is a freeze frame of a kinetic procedure. Thrill is won in the seeking of an image and the realization of it in my attempt to impose order on fluid chaos, finding a way to the final image by puzzling through it, leaving behind evidence of execution.

While the work is formally intuitive, it is calculated in its design and plotting, playing juxtaposed elements and relational situations against one another in the layering and building of the planar surfaces. This ongoing calibration, bridging chaotic uncertainly and the security of organization, has been and remains a central impetus
in my work, and is the continuation of a utopian fascination with color-as-form that began in my childhood.